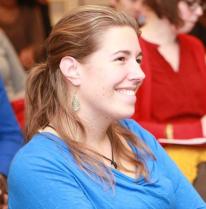 All of us have survived the first semester of African Studies. I fully agree with what comrade David wrote in the last blog; we have become a close-knit family – albeit one with extremely intense and sometimes even fierce dinner table discussions. We have started to feel at home at the African Studies Centre and we are learning a lot. Each lecture presents us with new information, (future) challenges to overcome but also with reflections on the workings of academia and what it means to become an ‘Africanist’. What do Africanists do, what is their position in (African and non-African) societies and what do we think they should be doing? And also: what do we ourselves want to do? All these questions buzz through our heads and are heatedly debated during our lunch breaks, but also often shoved aside for non-study-related things.

Fires of change
Some lectures invigorate in us the fires of changes, while others utterly depress us and make us feel small in this unfair world. When the latter happens we usually seek refuge in one of the bars near Leiden Central Station where we attempt to reinvigorate the before mentioned fires with beers and bitterballen. As will be clear by now – Njeri also wrote about it in the November blog – we all seem to have a rather activist approach to African Studies. I guess mostly with a Marxian twist: so far ‘philosophers have only interpreted the world, in various ways; the point is to change it’.

Emptiness
Due to all the above, the prospect of a month without classes was greeted with enthusiasm – “finally some time off” – as well as with a feeling of emptiness – “what do we do now”? We therefore decided that it might be good to still meet regularly and attempt to read some of the extra material that we have heard about, but would otherwise not have time for. After a brief discussion on our Facebookpage we decided to read parts of Mudimbe’s famous book The Invention of Africa. We chose this book because it was mentioned in many lectures as something all Africanists should read. In it, Mudimbe problematizes the knowledge production on Africa(ns): clearly vital information for students who are attempting to become Africanists.

A lesson
Agreeing on a time and place to meet in order to properly discuss this book turned out to be a little bit more difficult than we had expected. Many of us temporarily left the Netherlands in order to celebrate the holidays with their friends and families elsewhere and those who stayed around had lots of other things to do. In the end we decided to meet towards the end of January and we are all eagerly awaiting our little ‘reunion’. To me this proved once again that it’s easy to think about action and change, but really doing it always turns out to be (more) difficult. I suppose it’s a lesson we all had to learn, while in the process of inventing ourselves as Africanists.